I was watching a TV program last week called “Test your brain“, a series developed by National Geographic Channel which explores how the mind works.

The first episode was all about memory (interesting enough for musicians), but the second episode entitled, “You won’t believe your eyes”, really got me thinking about the effect of visual perception on musical performance and practice.

There is no doubt that we feel, in a physiologically measurable way, things that we see happening to other people. It’s why we get emotional in movies, it’s why we wince when someone else hurts themselves (think of your reaction to some of the painful accidents on the Funniest Home Video Show!) and it’s why we can get angry when we see injustice towards others.

It’s also why we can get so much from watching other people performing. The great thing about our brains is that it has a hard time realising the difference between watching something happening and doing it yourself. Watching makes your brain thinks it’s actually doing.

We know that music has a measurable effect on the brain: Music Leaves its Mark on the Brain and Do Musicians Have Better Brains? are just good articles on the topic. However, have you read the research about how seeing someone else’s pain affects your own brain?

Here’s a quick explanation from The Brain from Top to Bottom:

At a first level of analysis, many studies have shown that simply looking at someone else’s facial expression causes us to adopt a similar facial expression, often without even realizing it. Thus, underlying our social interactions and our shared emotions, there seems to be a mimicry that is usually unconscious and automatic. And this direct linkage between our perceptions and our actions makes us “resonate” with the person whom we are observing, whether we want to or not.

Other studies have shown the very real psychological effects that such a resonance can have. For example, people who observe other people being disgusted by a bad smell will experience a sense of disgust themselves. And we all know how unpleasant it is to see someone else cut themselves badly with a sharp blade.

Around the year 2000, brain-imaging studies began to show that when we see someone else who is disgusted or in pain, it activates, in our own brains, certain parts of the neural network that is normally active when we are actually experiencing disgust or pain ourselves. Around this same time, the gradual discovery of the existence of mirror neurons opened new avenues to study what many neuroscientists now refer to as our “shared neural networks”. Because mirror neurons are activated both when we make a certain movement ourselves and when we see someone else make it, researchers came to regard them as a highly likely substrate for this sharing process.

Although I’m not talking about shared pain in this article, the TV show made a strong connection between these “shared neural networks” and the effect of watching other musicians performing. Put simply, if you are studying an instrument and you watch a skilled performer performing at a high level, the mere act of watching can fire neurons in your brain that would fire if you yourself were performing.

Of course, I’m not a neuroscientist, so I’m only going on the research I’ve found, but in my experience this is true. In the last two years, I’ve attended as many masterclasses, lectures, lessons and performances as I’ve been able, in order to improve my own playing. There is no doubt that I get a buzz from watching stellar performances and, if my teachers’ comments are anything to go by, some of it seems to be rubbing off!

I guess we can also extrapolate to the positive effect of watching other good teachers teaching. This is something else I really enjoy doing on YouTube (even if I don’t always agree with the methods) and another great reason for attending masterclasses. Wouldn’t it be great if we could do more of this in our profession, much like classroom teacher observations?

Do you encourage your students to attend as many performances as possible to improve their own playing? Have you found that watching others performing/teaching has helped your own skills?

Of course, you are not going to learn to play the piano just by watching someone else – there’s no side-stepping good tuition and comprehensive, deliberate practice . However, if you are learning an instrument and trying to improve your performance skills, somewhere deep in your brain the right neurons are firing when you watch others playing. Sounds too good to be true!

So, sit back and enjoy your next voyeuristic practice session!

You’ve probably all heard about the “Flipped Classroom” and “Flipped Learning”. But what about about “Flipped Practice”? Just last week one of my students who is in year 6 at school (11 years old) and about to complete his Grade 4 piano was given a chord chart for the Jazz band at school. Even though I’m END_OF_DOCUMENT_TOKEN_TO_BE_REPLACED

What The Research Says About Piano Practice and Motivation [Book Review]

I’ve learnt a few things about piano practice and motivation in my time as a musician and music teacher. Here are some of them: The most important thing we can teach our students is how to practice effectively Students need to be taught about practice methods including spaced practice, chunking, interleaved practice, etc. We all need to END_OF_DOCUMENT_TOKEN_TO_BE_REPLACED 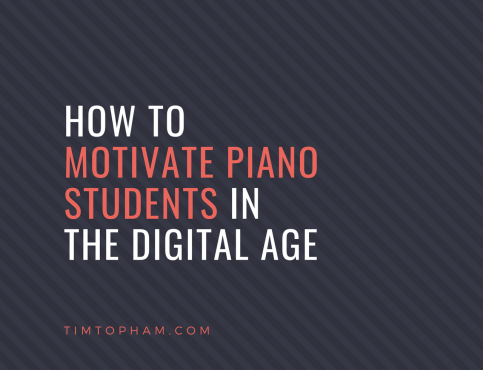 How to Motivate Piano Students in the Digital Age

Let us motivate piano students once and for all.

Motivating students to practice is a big topic for piano teachers. In fact, it’s probably the biggest one. Tackling this area is no small undertaking, and I’m delighted to welcome Samantha Coates to the podcast to talk us through it. In this three-part series Samantha is unpacking motivation and parent education, and what leads to END_OF_DOCUMENT_TOKEN_TO_BE_REPLACED

Have you ever wondered how a student’s practice diary or assignment book can best support their development as a musician or if there’s even any point in writing things down each week? Have you ever wondered if there are better ways that you can guide your students to practise effectively during the week? Many of us END_OF_DOCUMENT_TOKEN_TO_BE_REPLACED

This is the third and final part in our wonderful series on piano student motivation with Samanatha Coates. (Listen to part 1 here or part 2 here if you missed them.) Samantha shares a great quote in this episode: “It is not your job to motivate students. It is your job to create the environment END_OF_DOCUMENT_TOKEN_TO_BE_REPLACED