I don’t get stage fright.

For me, being on stage seems a very natural thing. I generally play with musicians who thrive in the live performance environment, and I can only recall one occasion where a bandmate was terrified of going on stage (I found him vomiting in the gent’s), but he thought the horde of punk rockers at our gig were going to beat him up. He was a trombonist, so maybe he had a point…

As a child, I’d ‘messed around’ with the piano (but refused lessons), played the snare drum in our primary school orchestra, and made intermittent but mainly unsuccessful attempts to teach myself how to play the guitar. I had no serious intentions of learning an instrument but harboured a desire to become a drummer.

By my teens, many of my friends were starting to form bands, but drum kits were expensive, and my parents wouldn’t buy me one. Just after my eighteenth birthday, with gifted money burning a hole in my pocket, I decided to buy a second-hand bass guitar from a friend. On the way home, I dropped in to see another friend who was a guitarist, so he could show me how it worked and how to tune it. Coincidentally, an old acquaintance of mine was there with his drum kit, and they invited me to play…

In a life-changing moment, I managed to play a song with them on my first attempt. I was a bass player.

After four months, we did our first gig, and I found it exhilarating – I felt no fear.

My experience of learning bass guitar was initially via teaching myself (mainly from listening to recordings and trying to work out the basslines) and getting advice from more experienced friends. Like the majority of musicians in the bands in my small town, I had managed to avoid studying music in school. It was seen as old-fashioned, stuffy, and completely irrelevant to what we wanted to do.

(By shunning the school music lessons, I also managed to avoid learning possibly helpful things like music theory and learning to read music, but those came later.)

A later path to studying music

I did begin to have one-to-one lessons about a year after I started, but this was focused on technique and theory related to the bass guitar and didn’t lead to any examinations. My later experience at music college was also very productive, and the learning was focused on performance – we did have to do examinations where we played, but these were almost an afterthought to the playing we did every day, and the gigs we were doing both in the college and in the local area.

Professional Career as a Musician

As I pursued a career as a professional musician, and later as a teacher, I became aware that some musicians experience severe issues with live performance.

Most of these people were classical musicians, and I wondered what could be the cause of their anxiety – why did many of them get stage fright (more officially termed Music Performance Anxiety, or MPA), and most non-classical musicians do not?

When I got the chance to study for an MA in Music Psychology, this was one of the areas that I wanted to explore, and I eventually chose to write my dissertation about it.

My initial research prompted me to consider the possibility that the way that most classical musicians learn, and more importantly, are taught, may provide a possible answer.

Related: Hear this interview on Helping Students Cope with Performance Anxiety with Dr. Noa Kageyama of The Bulletproof Musician.

In the UK, and in many of its former colonies, classical music education is very structured and dominated by the grade system. This is a process by which young musicians are taught music through a rigid process of preparation for examinations through which they achieve a certificated assessment of their abilities.

‘The Grades’ (as they are commonly known) were originally created in 1877 to assess musicians applying for places at the main music colleges. They are administered by their originators, The Associated Board of the Royal School of Music (ABRSM) and, more recently, Trinity College of Music.

As time passed, these examinations have ceased to be simply a way of gaining entry to a music conservatoire but have become the benchmark for attainment for music students in general. Music teachers, students and their parents have embraced the process, and it is now so well embedded into the music education system that the UK university admissions system (UCAS) even awards extra points to students who pass music grade exams higher than grade six. A distinction level pass at grade 8 is worth more than an A* at A level.

The grade system is often seen by students and their parents (who are the ones paying for lessons and examination fees) as a ladder to climb, and the parental desire for the learners to progress through the grades rapidly can promote teaching that focuses on the needs of the examination rather than a broader range of musical skills and abilities.

Tutors teaching within the grade system will almost definitely have experienced it themselves and are very likely to teach in the way that it was modelled to them when they were learning.

This ‘master/apprentice’ style of teaching discourages learner input and autonomy, as any work not aimed directly at the needs of the examination are seen as poor use of the limited (and expensive) time spent with the tutor. This lack of autonomy may also encourage students to feel more dependent on their teachers for their decisions regarding learning and may encourage a focus on the end result rather than the broader experience of music making.

In focusing so heavily on the examinations, where applicants are required to play pieces chosen from the syllabus, any playing is either to be assessed by the tutor in the lessons, and eventually by the examiner in the examination, which is the eventual aim of the learning.

This creates a ‘win/lose’ situation present whenever the student plays. To be faced with either passing or failing when you play can be a very undermining experience, and this can potentially remove any enjoyment from the performance.

Away from the grade examinations, the performing opportunities that classical musicians experience are usually within more formal surroundings such as a concert hall or theatre, where the audience sits quietly and applauds politely in the ‘right places’. The experience is perhaps not one that encourages learner musicians to present their playing to the critical eye of the public.

Playing classical music is hardly ever just for fun.

Conclusion about stage fright and the connection to exam-centred teaching

So, why don’t pop, jazz, or rock musicians suffer in the same way?

Well, they do, but fewer of them experience it, and it’s often less debilitating. Learning is often peer-supported, communal or, more recently, accessed via online content where the learner chooses the material and learns at their own pace without the pressure of an examination. The live performance environment for pop, rock and jazz musicians is also much less problematic, with gigs happening in pubs or clubs, for example, and the audience is expected to enjoy the experience by dancing, singing along and applauding when they wish to. There are no people grading you, and there’s no certificate to gain at the end. It’s just fun to play.

How could teaching, learning, and performing in the classical field be adjusted to potentially reduce MPA? Perhaps if classical musicians had the opportunity to play in less formal, less judgemental environments, and had access to more informal ‘communal’ learning from peers and knowledgeable elders as well as their formal instrumental lessons, then MPA may be less of an issue. However, the main way of helping to do this may be to scrap the grade system entirely, and make the aim of classical music education more about making music and less about achieving the next grade.

Related: Learn about teaching beginners without method books for the first ten lessons in “No Book Beginners”. 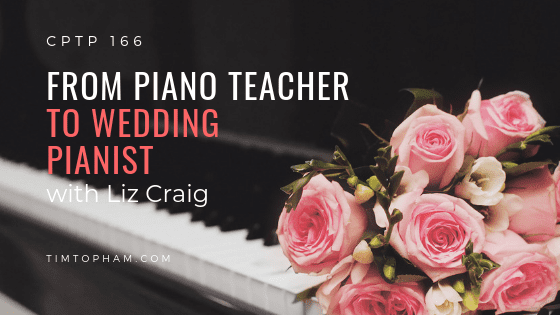 CPTP166: From piano teacher to wedding pianist with Liz Craig

Have you ever thought about playing for weddings? Becoming a wedding pianist can be a great complementary income for piano teachers and a fantastic way to perform and keep up your playing chops as well as explore new music. Liz Craig has combined teaching with being a wedding pianist with great success and it now END_OF_DOCUMENT_TOKEN_TO_BE_REPLACED

If you’ve been to a conference recently, you may have met Shana Kirk at one of the booths there. Shana is an expert on music technology and its applications in the piano studio. She’s here today to share seven ways you can use tech to make your recital more creative. We’ve all been to a END_OF_DOCUMENT_TOKEN_TO_BE_REPLACED

It is the million dollar question that all students will ask you at one point during their education: “How can I stop feeling nervous about performing?”.  Performance anxiety is natural and students deal with exams and concerts in different ways. Some students embrace the pressure that comes with it, while others need a helping hand.  END_OF_DOCUMENT_TOKEN_TO_BE_REPLACED

Take a track walk: getting students to slow down

Slow practice: the importance of precision I was chatting with a colleague at the end of last term regarding teaching students about slow practice. He let me in on a great secret about F1 racing drivers that we should all share with our students...especially the speed demons!   At this time of the year in END_OF_DOCUMENT_TOKEN_TO_BE_REPLACED

In an attempt to keep my teaching current and to learn from what the masters did in the past and consider how this affects modern playing and teaching, I am forever reading articles and books by noted pianists and teachers. If there is one thing that they all have in common, right back to the END_OF_DOCUMENT_TOKEN_TO_BE_REPLACED

Fun Piano Recitals Today we have a fantastic Expert Roundup post, giving you some ideas on how to organise fun piano recitals. Contributing to today’s post are experienced piano teachers and music bloggers. They are sharing with us a way of putting on a performance or recital that is different; a recital that is creative, END_OF_DOCUMENT_TOKEN_TO_BE_REPLACED

Tim Fletcher is a musician and educator based in the UK. He has taught a range of music-related topics at FE and HE levels, and trained teachers at postgraduate level. He currently leads rock and pop workshops in schools in Essex, UK, and leads music nurture groups for young students at risk of exclusion. He has also appeared in a film with Dr Who actor Christopher Ecclestone. Connect with Tim.