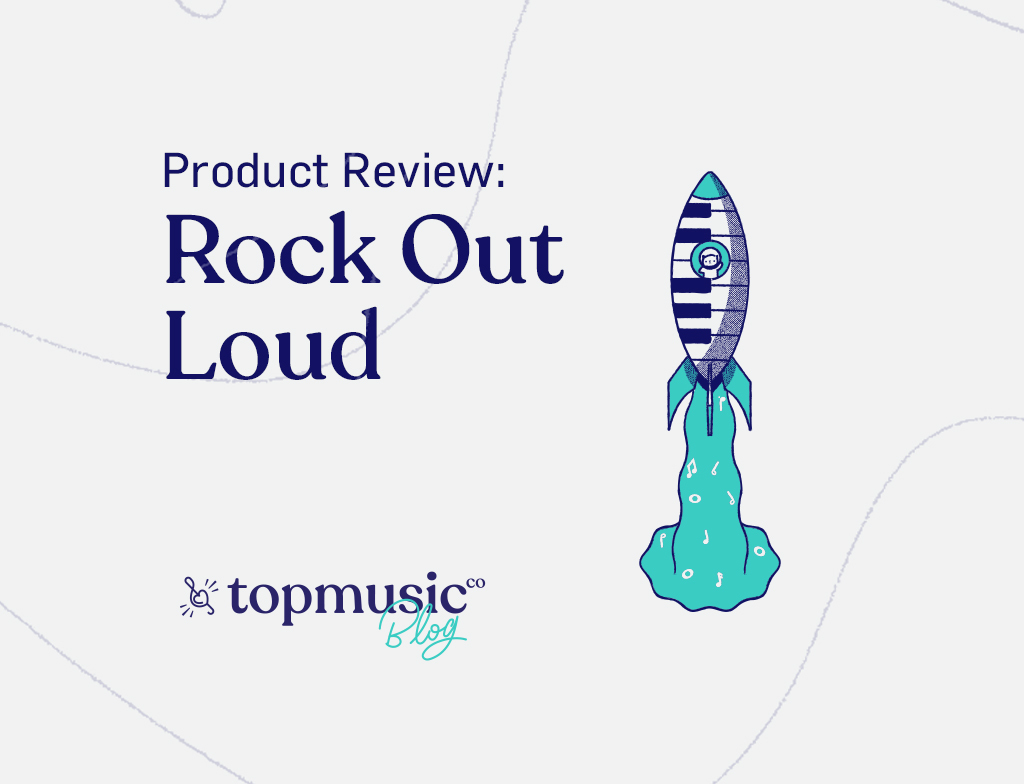 Recently, I attended a demo session for the new Rock Out Loud LIVE online lessons platform with the developer, Mike Grande. Here’s my review of this game-changing new platform for online music teaching.

I have to say I am IMPRESSED!

The potential for this platform is very exciting, and I think I can say with confidence that it will indeed be a “Zoom killer.”

The reason I believe this not only has to do with the app itself, but also my overall impression of Mike Grande as a person and his vision, which is very collaborative and community-driven.

Although he is taking on the burden quite a bit himself (I was impressed but a little surprised that he was so accessible and willing to field so many questions), he is taking feedback directly from the teacher community. He has enlisted a host of additional experts to help guide the process of improving this platform very quickly.

I will be testing RockOutLoud.Live (aka ROLL) thoroughly with both my students and other teachers over the next few weeks. If everything looks good, I plan on making a switch from Zoom this fall.

Tim Topham covered many features in his TopCast interview with Mike Grande (Listen to that episode TC199 here).

Danny Thompson, a TopMusic Expert, also interviewed him on Music Lesson Business Academy podcast. Danny has also been pretty involved in feedback on features, as he has been one of the “beta testers” Mike has relied on for feature development and testing.

Related: Learn Danny’s 7 levers of the music business in our membership-level course. Are your trial lessons and social media inquiries not converting? The 7 Levers course will give you the tools to grow your studio business and master metrics like conversions and opt-in’s, without the price tag of an MBA.

So here are some of the features we know about, which have been highlighted by Tim, Danny, and RockOutLoud on their demo website.

ROL has a higher quality audio, and a “codec” that places a priority on the sound when there is a bandwidth issue because of the internet connection. Zoom and other video conferencing platforms do the opposite (focus on video).

While this feature seems simple on the surface, and many teachers have commented that Zoom already achieves the same audio quality by configuring “original sound,” there is a bit more to it.

I’ll discuss it more at length in the next section.

Access is easy for students via a simple login process.

Integrated, on-screen sheet music and chord symbols!!!
This is a big one.

Most teachers on Zoom are either screen-sharing or just holding books up to the camera.

I’d say this is one of the more distinguishing features, albeit one that has less relevance for teachers like myself and Danny Thompson who are already using a multi-camera setup with third-party broadcasting software like OBS and ManyCam.

If you do not use that setup, this feature alone would be worth the switch IMO.

How is it different from screen-sharing?

Not only that – ROLL is creating a searchable library of sheet music that has thousands of songs already in it. I’ll have more to say on the true potential of this feature later.

Related: Teaching theory online got you down? Check out our conversation with Sproutbeat, bringing you short colourful theory games and sheets in bite-size digital format.

Security has been a ROLL feature from the start.

Founder Mike Grande is a “certified ethical hacker” whose day job involves cybersecurity for a large financial institution. Being an expert in internet security, he built this platform with security in mind from the start.

So, one key difference that allows both a more secure and a more stable connection between teacher and student on ROLL is the fact that it does NOT use intermediary servers – the connection is “peer-to-peer.”

One of the things that’s easy to take for granted is what I mentioned earlier about how community-driven and collaboratively informed this platform is.

That means Mike Grande himself has his ear tuned to the customers (teachers).

I did not have trouble getting ahold of him!

He is still scheduling demos with teachers one-on-one and in small groups and has a very active Facebook group of beta testers and teachers.

If you have a feature request or a support ticket, you’re not gonna be waiting MONTHS like you would from Zoom. He can respond more quickly and iterate changes based on our direct feedback.

Related: Read 15 reasons students quit over online lessons, and 15 ways to win them back.

The connection in the ROLL session is very reliable. It doesn’t cut out or freeze when I switch cameras (yes, you can do that), or change something else in the settings.

For teachers with a paid account teaching multiple instruments, you can even switch from one instrument “template” to another without having to restart the session.

During my demo, Mike’s laptop battery started to die, and his video turned off for a moment…but the session didn’t kick me out! He reappeared a moment later, and we continued with no issues.

Groups. ROLL supports up to 35 people comfortably in the same session. I will be doing further testing on the actual group control features and how they stand up to Zoom in a later post.

Okay, so that not-so-short list above are the highlighted features that Tim talked about in his podcast. While listening, Tim himself kept interjecting with phrases like, “What about…?” and “Do you have a solution for…?” Because of how new this platform is, there are quite a few “hidden” features that have not been prominently discussed yet. So, I’m going to talk about just a select few of them here.

? Just released on 8/6/2020! ROLL has a “lobby mode” in the security options (look for the yellowish padlock icon), so that students are not entering your room while you’re finishing the previous lesson.

It’s not mentioned, but there is indeed a chat feature on the left side of the screen, and it works quite well, with emoji and everything ? ?

The ability to log in as a “participant” from a second device (very similar to how many are using Zoom currently to show overhead keyboard view). However, support for multiple camera views on a SINGLE screen (like ManyCam and OBS studio) is coming in later update.

Yes, despite all attempts to alter and divulge from the normal presentation-style setup of most video conferencing and webinar software, ROLL actually does let you share your screen 🙂

It operates pretty much the same way Zoom does, even allowing the sharing of computer audio.

One feature that is noticeably missing is the ability to share your screen from an iPad or iPhone. Zoom allows this option through both a wired connection or Airplay.

The Big Deal About Full-Duplex Audio

I want to say more about this because most people don’t understand what it is and why this feature alone is probably a game-changer.

On my demo call the other day, one thing that I noticed right away was natural-sounding talking. In addition to the actual audio frequency quality being “better” (less compressed, which is somewhat dependent on your bandwidth and audio setup), I didn’t experience that distracting and ridiculous “cut out” that seems to happen all the time on Zoom whenever people accidentally talk over each other or whenever there is more than one sound source.

Mike explained that this is because while most video-conferencing software is technically “full-duplex audio” (ability to speak and hear audio both ways simultaneously), most platforms do not actually operate that way UNLESS you tweak the echo cancellation settings or have both parties wearing headphones.

On my call with Mike, I was wearing headphones, but Mike wasn’t, and neither were the other two participants in the meeting. I never heard the audio “duck” or cut out even once. And there were multiple times that various people talked over each other or interrupted.

Until Mike pointed this out, I didn’t even really know how to explain it, but I had been feeling a general sense of ease and calm that I rarely experience on Zoom because I usually have to be careful what I say and, more importantly, WHEN I say it in order to avoid the “cut out”.

Our conversations happened so much more naturally.

If I were playing the piano or listening to students playing the piano, this feature would become even MORE important. But conversation in general moves more quickly and feels more natural when “full-duplex audio” works as it should.

This feature may contribute GREATLY to both teachers and students feeling less “Zoom fatigue” and will also speed up most exchanges as the conversation flows more naturally.

In addition to multi-camera view on one screen, here’s what else is in the works:

This is coming in a future version, and the reason it is not already available is that ROLL is developing a BETTER WAY to do it.

They are trying to allow layered annotation directly on screen rather than reverting to the “screen-share” presentation-style that most video-conferencing and webinar platforms use.

Recording is also coming in a future version, but not as prioritized as annotation. Mike explained that he wants the live lesson experience to be retained by this platform and so the recording feature has not been on his radar until recently as more teachers are requesting it.

When I asked Mike about copyright/licensing and the sources for that sheet music library that is included with the paid versions, he revealed something that really got me excited – he’s in talks with Hal Leonard about acquiring a license for their entire sheet music library!

So, for those teachers who have been sending your students to Amazon or SheetMusic.com to purchase their sheet music (and then waiting until they ACTUALLY purchase it), ROLL is going to streamline this entire process.

Copyright and licensing is a big topic, and I’m sure there will be more discussion about this. But for me, I can see a HUGE value in this feature and its companion – the ability to upload my own custom library of PDF worksheets and sheet music.

Given that ROLL is already crossing into this territory, I think it’s highly likely that we will see licensing agreements with other publishers and content providers in the future if the partnership with Hal Leonard is successful.

So that’s my take thus far. Once I get a chance to get more hands-on with the platform in some test lessons, I will provide an update.

Until then, ROCK ON!

RockOutLoud.Live gives me hope for the future of online lessons!

Ian Belloso is a classically-trained pianist, an aspiring composer and an electronic music producer. Growing up, he realized early on how much his own passion for learning the piano was fueled by a hunger to actually CREATE music. Now, he splits his time between producing, recording, and teaching his students everything he learns - and continues to learn. He is the owner of a thriving private studio in Southern California. Find Ian at PianoBelloso.com

15 Reasons Parents Reject the Switch to Online Lessons, and How You Can Win Them Back

Not How I Was Taught! Your Ultimate Guide to Online Piano Teaching

6 mistakes I made when I started teaching piano